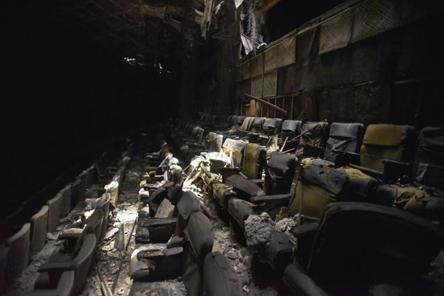 This was a client project to depict ‘Uphaar Cinema’s’ fire which happened in 1997 in Greek Park, Delhi and also show possible solutions so that the disaster wouldn’t have happened. Trapped inside, 59 people died, mostly due to suffocation, and 103 were seriously injured in the resulting stampede.

– So various possible solutions to this event was marked by the client like sliding walls for exit, neon glow paint on path to exit if short circuit takes place and power shuts down, retractable chairs so in emergency situations they retract giving space for people to run. Also various disasters like fire (death by flames), smoke (death by choking), fall of roof were considered in this project.

– Navmesh Agents’ Basic Exit: So, in the first part retractable chair work was done. So 3 raycasts are thrown at straight front of chair, at -45 deg., and at +45 deg. to it; detecting human beings in front of it. If no human in front of chair exists in emergency situations, then the chair retracts.

– Re modelling Sliding Walls for Exit: Sliding walls were required to be re modelled and rigged.

– Neon Glow Paint: Glow paint was used with the idea that it will help the navmesh agent direct to the required path in darkness (i.e. short circuit scenario).

– Particles (Fire + Smoke + Roof): The project ended with giving some more visual information about the tragic event. So a prototype was given basically for the client to decide how to use these assets.